Get Your Skates On 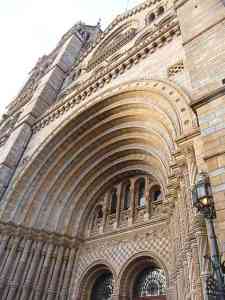 The clocks have gone back and it’s getting darker (boooo). But there is one good thing about winter creeping up on us – Christmas is on the way.

Why is that good? Well because feel-good Christmas and winter things are popping up all over the place. Like the Ice Rink at the Natural History Museum.

The famous ice rink opens this weekend – Friday, November 5, to be exact – and will be open for your skating pleasure until early January next year.

If you fancy the idea, but have no idea how to skate, don’t worry – lessons are available from £30 a session.  Otherwise, it’s £13 adults/£8.50 concessions for an hour of skating.  Good news for students, too – on Mondays and Tuesdays you can get down for a session and drink at the bar for £8 (you need your student ID and the offer is running until December 7).

You need to book tickets – see here for more information.

I went to the British Music Experience at the O2 yesterday afternoon.

It’s a museum documenting the rise of popular music from the 50s to the present day, and has a great display of original hand written lyrics, stage outfits from Petula Clark and Mick Jagger (to name a few) and other musical paraphernalia.

The place is really interactive, allowing you to learn how to play various musical instruments (I was taken back a few years by taking a drum lesson, which was quite fun considering I’ve not picked up a pair of sticks for about 7 years) and my friends and I had a good time playing on Beatles Rock Band.

Being a museum, there are obviously historical elements to the place, and you can learn about the different styles of music that have emerged over the decades, while songs of the era play out in each of the different rooms.

Your ticket can be used to access a lot of the interactive stuff, and you can save various things via the barcode, where you can access it later.  So if you want to hear a ‘fabulous’ rendition of Girls Aloud’s ‘Sound of the Underground’ when you’re back at home (*ahem*) you can get it off the BME website via a special code on your ticket.

The museum is quite interesting if you’re a music geek, like me.  But it’s probably more interesting for kids, because of the interactivity.  You could probably get round the place in about an hour and a half if you didn’t stop to play on all the instruments like we did, so for £15 it might not be the best value.

Still, if you go in the next week or two, here’s a good tip: Sky have a booth near the entrance to the O2, where they’re doing a promotion on their new 3D channel.  If you pop in there for 5 minutes, they’re giving away a 2 for 1 ticket to the BME.