My roving reporter Jon Forman has been out and about exploring the city again.  Here’s his take on the Tower of London.

The parents have been down this weekend, staying in a hotel on Gloucester Road. They were promming over at the Royal Albert Hall on Saturday night – I think it was a Hungarian Orchestra playing some Mahler and Beethoven – and then Sunday left us free to dive into some good old fashioned tourism. Father expressed an interest in visiting The Tower of London; something which initially struck me as a little strange. Does he have a passing interest in History? Yes. Does he often express an interest in exploring the nationalistic embodiment of the hegemony of the monarchy? No. 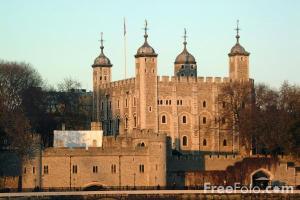 The Tower of London (Picture courtesy of FreeFoto.com (c) )

Anyhoo, explore we did and upon my arrival at the nominated location at the anointed hour, Father was already looking rather pleased with himself having successfully negotiated the ‘interweb’ to pre-book tickets. We decided a good plan of attack would be to take on the wall walk, and on heading up the first of perhaps a hundred narrow spiral staircases the day would bring, we were thrust into the full history and atmosphere that The Tower has to offer.

It’s easy to forget the impact that some of The Tower’s past residents and internees have had on the country, nee the world. Henry the VIII and Anne Boleyn, Sir Walter Raleigh and the Kray Twins don’t often appear in the same sentence but have all spent time within the walls of The Tower for varying reasons.

The general ambience and presentation of information really gives you  this sense, whilst also providing interesting facts that you might actually stand a chance of remembering. The exhibits are genuinely engaging and err just on the side of what I’d a call ‘glam historical macabre’. See the Block and Axe with which Lady Jane Grey met her grizzly end, sit on the chair which bore the weight of the final soul to be dispatched at the tower. (A WWII German spy – death by firing squad whilst sat down!)

I was genuinely surprised to find myself lapping up this same atmosphere which keeps those lovable Yanks coming back year on year. If there’s one thing we Brits do well it’s Pomp & Circumstance and the epitome of this was the excellent exhibition on the various Crown Jewels to which The Tower is a home.

I was impressed with the ‘overall attitude’ and packaging of the day out. Ice creams weren’t too expensive, the place is excellently maintained, and exhibits are modern and labelled in an informative manner. If you stay to take in everything on offer, you’ve got a full day out on your hands. The parents and I got through the majority of the exhibitions (including the Ravens) and this took us from 10am until 4pm once we’d included a short break for lunch!

Overall the day brought tired legs and full minds, and there was a real buzz about the place. I found a particular pleasure in the failed actors unleashing their inner jester to entertain the cue for the Crown Jewels.

On this showing, I’d say that The Tower has cemented itself as one of the Capital’s top-flight and most value for money attractions. To coin a phrase one might call it the Jewel in the Crown…….