Hello, and a Happy New Year to you all!

I hope you all had a good holiday period and 2011 has started out well.

You may have noticed that I haven’t posted for a while.  Sorry about that.  I’ve been pretty busy lately, and have just spent 3 weeks abroad.  As it happens, I’ve realised that I need some help to keep the blog going – I would hate for it to have to stop altogether.

So, I’m looking for contributors to the site who can help keep things ticking along.  Ideally this would suit lovers of London, explorers and adventurers, possibly students and preferably journalism students at that.  Although, of course, one can’t be too fussy – so if you think you’d like to get involved, please drop me an email on londonlovelies@googlemail.com

I am happy for you to contribute as much or as little as you’d like, but I must tell you now that I am unable to pay you for your efforts.  Never fear though, each piece you write will be credited accordingly.

If that hasn’t put you off, please do get in touch.

I’ve changed the way I email you all – so if you’re lucky enough to receive my email updates, please visit the site to re-enter your details.

The sign-up button is in the same place – on the right hand bar.  As before, you’ll only get emails when I’ve posted something new; nothing more, nothing less.

Taking place in the Alma (on Newington Green Road), the pub is hosting an array of ciders to keep you going (20, to be exact) – all hand-pressed and the like.  Food will also be on offer.

Running until Monday, August 30, there’ll also be a band playing from 8pm on Sunday.

Ever watched the rugby and thought ‘I wonder what it’s like to look up from the pitch?’

Well, now you can get yourself down to Twickenham AND get cheered for your effort.  It’s all part of  the National Family Week Sports Day at Twickenham Stadium – which includes a ‘Run for their Lives’ 5k run in aid of the Future Hope home and school, which gives Calcutta’s street children real hope for the future.

The run will finish on the famous rugby pitch and make a real difference to some of the most vulnerable children in Calcutta.  Youngsters at Future Hope play rugby in Harlequins sponsored kit, even in the monsoon, and their Under 16s recently became All India champions.

Want to Get Involved?

It’s all happening this Saturday, June 5.  The run starts at 1pm, with a warm up from Virgin Active Classic Health Club trainers.  You can register on the day from 11:30am or in advance by emailing rachelmowbray03@hotmail.com 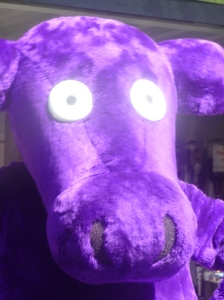 The Underbelly started in Edinburgh  at the Edinburgh Fringe – and it’s back for its second year in London on the Southbank.

Music, comedy and theatre, including shows from the likes of Alexei Sayle, Brendan Burns and smaller but equally as good comedians like Carl Donnelly and Andrew Maxwell’s Full Mooners – and a beatboxing show – are all on offer throughout the festival.

I went there last week to hang in the beer garden.  Drinks are reasonably priced and the garden is a nice place to catch the sun (if it’s out!).  You don’t need tickets to sit in the garden.

Shows are on right now and  run til July 18.

Ticket prices depend on the show –  for more information go to the Underbelly website.

The Futureheads are doing a FREE instore performance at Pure Groove this Thursday, May 6.

Head down there for 1:15pm to be in with a chance of seeing them. They’ll be doing lots of new stuff, including new single Hearbeat Song, as well as a few classics.

Another bank holiday is upon us – time to celebrate!

Saturday and Sunday sees an invasion of live music at venues around Camden, including a series of concerts at the Roundhouse in the evenings.

There are loads of great bands playing, including: The Drums, New Young Pony Club, Summer Camp, Pendulum and We Are Scientists.  Click here for a full line-up.

Tickets are still available – £38 for a day ticket.  You can get them from the box office at the Roundhouse.

Slightly random, but here at LondonLovelies we embrace the quirky.

Little Venice is hosting a range of stalls, refreshments, boat trips and even a Teddy Bear’s Picnic at this canal festival.

Highlights are a pageant of decorated boats on Saturday afternoon and an illuminated boat procession on Sunday night.

Runs from Saturday to Monday – click here for more information on specific timings.

The Gumball 3000 is the famous car rally which sees a variety of vehicles make their way across Europe, Canada and America over eight days.  It’s a whopping £30,000 to enter, but don’t worry, you can watch it all kick off for free from 1pm on Saturday at Pall Mall.

For those of you in SE London, check out this craft fair on Saturday.

Handmade jewellery, cakes stalls, books, stationery, clothing and lots of other cool stuff will be on sale at Dulwich Wood House.

If you want to do something worthy whilst taking in some exercise, how about going for a run? Don’t worry – the marathon was last week – this week it’s a Nun Run for Barnado’s.

They do loads of these in America – including the infamous Santa Run in Philadephia…!

This one’s organized in conjunction with Sister Act The Musical.

Pure Groove is putting on a free night out on Monday – here’s the official blurb:

Seams is part of the new wave of twisted electronica coming out of the capital – guys taking the influences from garage, cut n’ paste sampling, minimal techno and myriad other genres to create something very modern, very internet and very, very good! Shells is another in this field, bringing a slightly more dancefloor groove to his soundscapes – can’t wait to hear the two of them live. Plus Becoming Real DJing PLUS A VERY SPECIAL GUEST!

Lots of painted elephant statues will be popping up around London on Monday – including at the Southbank and Trafalgar Square.

It’s all for charity,  to raise awareness of the endangered Asian elephant – they’re the ones with the smaller ears.

All the ellies have been painted by artists, celebs and designers inc. Diane Von Furstenberg, Paul Smith, and Storm Thorgerson who I mentioned on last week’s radio show (or you can have a gander here if you can’t remember).

The following items were suggested by G Parmar via Twitter:

Sunday sees Night Of 1000 Voices hit the Albert Hall in aid of Leukemia and Lyphoma Research.  It features stars from West End musicals like Oliver and Wicked.  Tickets are priced from £15 and all money goes to charity.

Have a great weekend everyone – and if any of you have other suggestions for things to do over the next couple of weeks, let me know and I’ll post them up.

LondonLovelies
Create a free website or blog at WordPress.com.